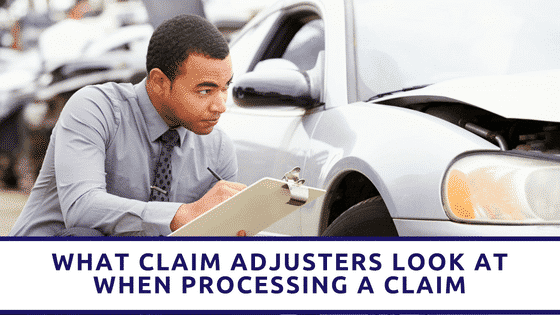 What Claim Adjusters Look at When Processing a Claim

Making a claim against your auto or homeowners insurance will likely trigger a visit from claim adjusters. The adjuster acts as a go-between tasked with the responsibility of gathering information and reporting back to the insurance company for processing. Most adjusters in the modern era don’t have the authority to settle claims on the spot.

The specific things claim adjusters look at differ depending on the types of claims being made. In the case of auto insurance, the adjuster begins by gathering information about the accident in question. He or she will want as many details as possible. The adjuster will want to know when the accident occurred, who was involved, the results of the accident, etc.

All of this preliminary information can be gleaned from interviews, police reports, and DMV accident reports in states that keep such records. An adjuster will sometimes review these records with the customer.

The adjuster’s investigation may require additional information as well. For example, adjusters may request access to medical records and wage information on accident claims that include personal injury damages. Even medical bills might be requested during the investigation.

A big part of the claims process is determining whether or not what the customers says happened is legitimate. This isn’t normally a huge problem for auto insurance, but fraud does occur from time to time. Adjusters are tasked with uncovering as much information as possible that might indicate a fraudulent situation. A final determination is ultimately made by the insurance company’s expert reviewer.

When an incident involves homeowners insurance, the claim adjuster has to look at an entirely different set of data. At the top of the list is the actual damage being reported. Claim adjusters want to know what caused the damage, how much damage was actually done, and if any of the observed damage can be attributed to something other than what was reported by the customer.

For example, an insurance company will not be keen on paying the full value of a new roof if some of the post-hurricane damage cited actually existed prior to the storm. It’s up to the adjuster to sort out how much of the claimed damage is related to the named incident as opposed to other damage that previously existed.

Another part of the adjuster’s job is to determine liability. In short, liability describes how much the insurance company is required to cover based on the terms of the policy in question. The insurance company might not be liable if it turns out that a customer’s violation of the terms and conditions of that policy led or contributed to the damage.

Finally, the claims adjuster will look at the totality of the damage in question. This may imply damage to contents, other buildings on the property, etc. That peripheral damage will be considered by the insurance company in an attempt to come up with a reasonable settlement.

Fairness and Protection Are the Goals